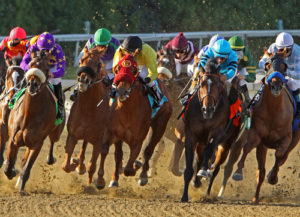 How much of it was luck? How much of it was studying? Margaret Reid of Austin, Texas is a long-time horse racing fan who said she carefully studied her races on May 5. Reid then went to the Retama Park Race Track in Selma and walked out with $1.2 million. All Reid did was wager $18 total.

How did she do it? She correctly picked the winners of the eighth through the 12th races in a Pick 5. After the first four races were completed, she watched Justified win the Derby by 2 1/2 lengths. This means Reid pocketed approximately $66,666 per dollar wagered.

Bet on horse racing at bet365

Considering Justified’s total winnings were estimated at $1.24 million, Reid had nearly as good a day — without getting soaked in mud. Justified entered the Derby as the 3/1 favorite, but Reid showed off her racing knowledge by picking some outsiders in the earlier races (prooving it wasn’t all luck). Here’s how it went down in the four races before the Derby: 8/1 Mauraud won the American Turf Stakes, 10/1 Yoshida won the Old Forester Turf Classic, 40/1 Funny Duck pulled off a monster upset in the Pat Day Mile and the 4/1 Limousine Liberal won the Churchill Downs Stakes.

A December 2, 2014 article in crainsnewyork.com reports that Draft, the fantasy sports app has more in common with Words With Friends than with fantasy ...