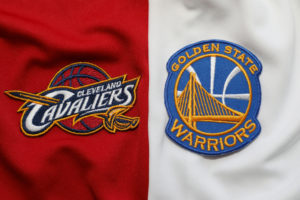 Bet on the NBA Finals at bet365

The latest wagering odds at bet365 as of May 29 listed Cleveland the unlikely winners of the series at 7/1 with the Warriors 1/11. Home court advantage is one of the minor reasons, but the oddsmakers don’t see things going the distance. Golden State is 4/1 to win it in seven games and Cleveland 25/1 to do the same.

The first game may set the tone for the series and Golden State is a 12-point favorite — and 10/11 to win outright with Cleveland at +12 at the same odds. If you’re looking at the bet365 money line for the opening contest, Cleveland’s 25/4 to pull off an upset with Golden State at 2/19. The over/under is listed at 214.5 points at 10/11. Of course, if you don’t agree with those, you can always check out the alternative points spread and over/under options.

There are always other markets at bet365, such as the winning margin, team-with-highest-scoring-quarter, odd/even score, the finals MVP, double result, race-to-20-points and winning margin-3, 7, and 12-way options.

Neighboring nations Sweden and Denmark will be battling out to reach next year’s European Championships in France by meeting in a two-legged playoff series.