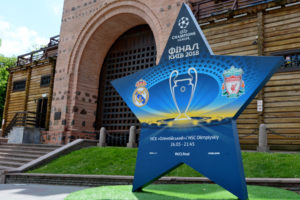 There’s a new threat to Cristiano Ronaldo and Lionel Messi’s “greatest goal scorer in the world” debate. His name: Mohamed Salah. While Messi still won the Golden Boot with 34 goals, the Egyptian international forward scored 32 times in 36 games for Liverpool this season. Ronaldo managed 26 goals in 27 league outings, but he led the Champions League with 15. Salah followed with 10.

Bet on the Champions League Final at bet365

Real Madrid’s Ronaldo and Liverpool’s Salah meet May 26 when they battle for European club bragging rights in the Champions League final in Ukraine. As for the game itself, bet365 (as of May 21) had Real as the slight 6/5 favorites, Liverpool at 21/10 and a 90-minute draw at 13/5.

Individual prop bets
Getting back to Ronaldo and Salah. We find Ronaldo 3/1 to score first or last and 4/6 to notch a goal anytime. Salah’s 15/4 to open or close the scoring and 5/6 to bag a goal anytime.

Speaking of goals, both teams combined for 76 scores during the Champions League campaign. The over/under market is set at 2.5 goals with the over being 4/9 and the under at 17/10. The market for both teams to score is also intriguing with yes 2/5 and no at 7/4.

The NRL (National Rugby League) Grand Final is all set to go at Suncorp Stadium in Brisbane, Australia this Sunday, Oct. 3rd as the Penrith Panthers ...