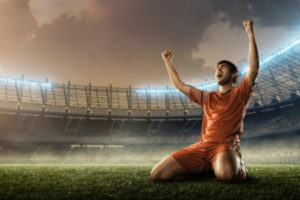 It may sound like hype, but the league title likely hangs in the balance. If United loses, Man City will stretch their lead to 11 points.

But what makes this matchup even more attractive than usual? The two neighbors are the top two teams in the league and the contest will feature the best offense against the top defense. Man City hasn’t lost a league game all season while United will be trying to derail them and close the 8-point gap. However, they’ll have to do it without arguably their top player as United midfielder Paul Pogba, arguably their best player who will miss the match with a suspension.

Manchester United vs Manchester City – Head to Head:
The two sides have met 174 times since 1891 — with United winning 72, losing 50 and drawing the other 52. They squared off twice last season and played to a 0-0 draw at the Etihad with City winning 2-1 at Old Trafford. They also met in the League Cup, with United winning 1-0 at home. United has lost just one of the last six meetings along with three wins and two draws. However, they lost five of the previous six encounters.

Man City enters the weekend on top of the Premier League with 43 points from 14 wins and a draw. They’re the top scoring team in the league as well with 46 goals under their belt and have allowed 10 against for a league-high differential of 36. City has been perfect away from home with seven wins with 18 goals for and just four against. Their last league outing was a 2-1 win over West Ham United at home on Sunday.

Man United sits in second place in the standings after their 3-1 away win over Arsenal last weekend and is eight points back of City. They have 11 wins, two draws and two losses for 35 points with 35 goals for and a league low nine against. United enters the match just three points ahead of third-place Chelsea and six up on Liverpool. Old Trafford has been a nightmare for visitors so far this campaign as United owns the best and only perfect home record in the league at seven wins while scoring 20 goals and conceding just once.

United’s stingy defense has led to a league-leading eight clean sheets so far this year, but City is right behind them with seven of their own. The two teams also lead the division in goals scored after the 75th minute as City has scored in the last 15 minutes of games on nine occasions and conceded once while United has found the back of the net late in games eight times and allowed one against. This means fans definitely shouldn’t be leaving Old Trafford early to try and beat the traffic.

Along with the Premier League’s top two defenses, we’ll also see the best two offenses in action here. City leads the way with their 46 goals with United behind them at 35. English international forward Raheem Sterling has been the biggest surprise of the season when it comes to scoring — he’s tied for second in the league and leads City with 10 goals. However, he’s definitely not a one-man team as teammates Sergio Aguero, Gabriel Jesus, Leroy Sane and Kevin de Bruyne have nine, eight, six and five respectively.

United also has a couple of the league’s top-10 scorers as Romelu Lukaku has found the back of the net eight times and Anthony Martial has six goals to his name. As far as injuries go, United boss Jose Mourinho said Nemanja Matic and Zlatan Ibrahimovic should both be in the squad, while Phil Jones and Marouane Fellaini are questionable. Michael Carrick and Eric Bailly will miss the match. City manager Pep Guardiola has been hinting that David Silva could be sidelined, but Mourinho has accused him of misleading the press regarding his injury. However, Samir Nasri, Benjamin Mendy and John Stones are all out of action.

Mourinho has a habit of parking the bus when facing any of the league’s top teams, but if he does so here he may as well kiss this season’s title challenge goodbye. A win will close the gap to five points, but an 11-point deficit will be too big of a mountain for United to climb.

The new 15 percent United Kingdom Point of Consumption Tax (POC) for gaming operators servicing the UK went into effect on December 1st, 2014. As ...