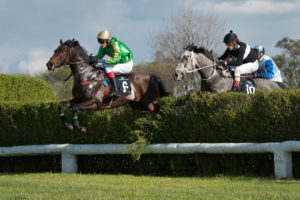 There’s no doubt the Grand National at Aintree is still the granddaddy of all jump horse racing events in the UK, but like a state trooper in hot pursuit of a fleeing bandit, the Cheltenham Festival is steadily gaining ground.

Cheltenham is held every mid-March with the Grand National typically following a few weeks later. The 2018 Cheltenham Festival is set for March 13-16. Each year, as winter thaws, all British and Irish horse racing enthusiasts look forward to the four-day event at Cheltenham Racecourse in Prestbury Park regardless of the unpredictable weather. A typical festival will draw crowds of about 200,000 from the UK and Ireland and its proximity to Saint Patrick’s Day on the calendar doesn’t hurt.

But as Cheltenham grows in popularity on the annual racing calendar, it sometimes overshadows several of the nation’s other top steeplechase events and races such as Tingle Creek at Sandown Park, the King George VI at Kempton Park and the Betfair Chase at Haydock Park.

These are all well-supported in their own right, but Cheltenham is gradually pulling away from them in terms of popularity with fans, punters and the racing industry itself. While a few owners still bypass the festival and hold out for other events, most trainers and owners are now obsessed with entering their horses at Cheltenham.

As a result, other UK events have been suffering slightly due to the surge in Cheltenham’s popularity. In certain instances, trainers and owners will avoid competing elsewhere during the season just to save their horses for the prime March festival.

If and when this happens, it can result in some watered-down races around Britain with the favorites usually cleaning up when faced with less-than-stellar opposition. With the field not as strong as it could be, these top horses often don’t get a good enough workout when they run to victory without a stiff challenge.

We all love Cheltenham. But the downside to this trend is that many of the top horses aren’t facing each other on a consistent basis and bookmakers, bettors and television broadcasters could lose a bit of interest if it continues.

Of course, the top horses themselves may also become a bit lackluster if they aren’t facing each other regularly throughout the racing calendar. Fans and bettors always want to see the top horses going head to head against each other instead of just two or three times a year at the most popular racing events.

But when horses are being protected or saved for Cheltenham, it just goes to show how popular the festival is. Fans — many of them Irish — spend four days witnessing the best British and Irish-trained horses take each other on while sharing pints of Guinness and witty banter about their racing experiences.

In many ways, Cheltenham Festival is more of a social happening than a horse racing spectacle. Still, those who do view the annual event as an important date on the racing calendar are fortunate enough to see and bet on the best horses across UK and Ireland. They just wish trainers and owners would take this approach at more jump racing events throughout the year.

At the moment, it appears owners and trainers don’t want their horses to spend too much energy before showing up at Cheltenham. As a result, events such as the Betfair Chase, King George and Dublin Racing Festival at Leopardstown are somewhat lacking when it comes to top talent — even though the prize money is first class.

Therefore, the popularity of Cheltenham has become a bit of a puzzling situation since it’s inadvertently affecting some of the other top jump races as well as the sharpness of the horses themselves.

One solution would be for owners and trainers to view the new two-day Dublin Festival as an Irish version of Cheltenham and make sure they let their horses compete each February.

The Cheltenham Festival will always be the pinnacle of the jump racing season for many. However, horse racing enthusiasts are hoping owners and trainers will soon start to realize there are numerous other worthy events to enter and compete in each year.

TWO CANADIAN-BORN TEENAGERS SET TO BATTLE IT OUT IN US OPEN WOMEN’S FINAL ON SEPT. 11TH

The US Open women’s tennis final will feature youngsters Emma Raducanu of Great Britain against Leylah Fernandez of Canada in the first all-teenage final at ...