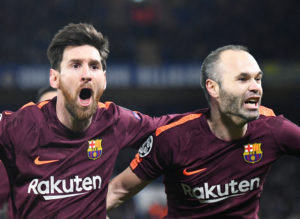 Now it’s getting good: With the European Champions League draw held March 16, we’re down to the final eight teams. The slate features some fascinating matchups, including an all-English encounter.

Bet on the Champions League at bet365

The pairings are as follows:

Liverpool vs Manchester City (Wed. Apr. 4 in Liverpool and Tue. Apr. 10 in Manchester)

Barcelona, Bayern, Munich and Manchester City are favored to make the semifinals with the Juventus vs Real Madrid clash a rematch of last season’s final.

Let’s take a closer look at the final eight clubs as well as their current 365 betting odds of winning the tournament as of March 16.

Barcelona 5/2
Many fans figured Barcelona would be a little weaker this year after Neymar headed to PSG, but that hasn’t been the case. Lionel Messi and Luis Suarez still know where the net is and Paulinho gives them another dimension in the midfield. Barca easily got past Chelsea 4-1 on aggregate in the round of 16 after cruising through the group stage and shouldn’t really have a problem against Roma. They may be missing midfielder Sergio Busquets with a broken toe but should still be too strong for the Italian squad. Five-time European champions Barcelona are unbeaten in the tournament so far this campaign and have conceded just two goals. They have four wins and two draws in their last six matches in all competitions up to March 16th.

Manchester City 3/1
The runaway leaders in the English Premier League will face the one and only team that has beaten them in domestic league play this season. Liverpool jumped out to a 4-1 lead over City in January and hung on for a 4-3 win. But let’s not forget City thumped 10-man Liverpool 5-0 earlier on in the year. City has enough goal scoring prowess to sneak past the Reds in the quarterfinals, but there are question marks in their own end of the pitch if the reach the semis. They can be a dominant squad at times with the likes of Sergio Aguero, Raheem Sterling, David Silva, Kevin de Bruyne, Gilberto Jesus and Leroy Sane. But other than manager Pep Guardiola, they lack Champions League experience. This is just their second appearance in the final eight after downing Basel 5-2 in the round of 16. Man City has four wins and two draws in their last six matches in all competitions up to March 16.

Bayern Munich 4/1
Bayern Munich will be heavily favored to knock off Sevilla and new manager Jupp Heynckes is on a hot streak with 23 wins, two draws and just one defeat in his first 26 games. The team has also won six straight Champions League matches. Bayern still misses top goalkeeper Manuel Neuer, but has the scoring power to be a threat to anybody out there, especially if James Rodriguez and the exceptional Robert Lewandowski are in top form. The reigning German champions and runaway league leaders this year proved this in the round of 16 by hammering Besiktas 8-1 on aggregate. Bayern has five wins and a draw in their last six matches in all competitions up to March 16.

Real Madrid 9/2
Los Blancos have been crowned champions of Europe a record 12 times, including the last two years in a row and three of the last four. The Spanish giants may be struggling somewhat in La Liga, but are firing on all cylinders in the Champions League. They downed Paris Saint-Germain 5-2 in the round of 16. Real Madrid has the experience to realize what it takes to win it all, and with Cristiano Ronaldo leading the way — and looking for his fourth title with the club — it’s hard to bet against them. Juventus should push them to the limit in the quarterfinal, but Real’s potent offense should overcome the Italian side’s vaunted defense. Real Madrid has five wins and a loss in their last six matches in all competitions up to March 16.

Juventus 10/1
Like most Italian sides, Juventus is strong defensively. However, do they have enough offensive talent to get past Real Madrid? They sneaked past Tottenham Hotspur 4-3 on aggregate in the round of 16, so it’s possible they can do the same to Real. However, they lack in overall depth and 40-year-old goalkeeper Gianluigi Buffon has recently showed signs of his advanced age as he chases his first Champions League title. Still, anything can happen if attackers Paulo Dybala and Gonzalo Higuain get hot. Of course, Juventus has been unlucky in Europe by losing two of the last three finals and winning just two of their nine final appearances. But the club has six straight wins in their last six matches in all competitions up to March 16. Juan Cuadrado and Federico Bernardeschi are likely to miss the quarter-finals.

Liverpool 12/1
There’s no doubt Liverpool can score goals. In fact, they’re second in the Premier League in that category with 68 and the top remaining Champions League scorers. And let’s not forget they’re unbeaten in the tournament this season and are five-time champions of Europe. However, the problem is they often have a hard time keeping the ball out of their own net and they’re facing Man City, the only team with more Premier League goals. The Reds downed Porto 5-0 on aggregate in the round of 16 but now face a much stiffer test. Fans may be in for a treat if this matchup is as exciting as Liverpool’s 4-3 Premier League triumph over City earlier this season. The key players here are attackers Mohamed Salah, Roberto Firmino and Sadio Mane. Liverpool has four wins a loss and a draw in their last six matches in all competitions up to March 16.

Roma 66/1
Roma just got past Shakhtar Donetsk on the away goals rule in the round of 16 after drawing 2-2 on aggregate. But this is likely the end of the line for the Italian club as Barcelona should be too powerful for them. They’re a touch more consistent than Sevilla, but not by much. They’d need strikers Diego Perotti and Edin Dzeko to catch fire to get past Barca. Roma has reached the European final just once before, but were beaten by Liverpool back in 1984. Still, this is the furthest they’ve advanced in the past 10 years. Roma has four wins and two losses in their last six games in all competitions as of March 16.

Sevilla 66/1
Sevilla is the third Spanish team left in the tournament, but is generally seen as the weakest of the remaining eight clubs. They beat an uninspired and lethargic Manchester United 2-1 on aggregate in the last round and that might be where they peak. Their lack of scoring power won’t do them any favors, and if they go any further against Bayern Munich it’ll be regarded as a big surprise. They’ll be relying on Wissam Ben Yedder to lead the attack, but this is their first quarterfinal appearance in 60 years and they’ve never advanced past this stage. On the bright side, Sevilla won three straight Europa League titles from 2014 to 2016. The club has three wins, two losses and a draw in their last six matches in all competitions up to March 16. Ever Banega is suspended for the first leg.

The article originally appeared in Fox Sports. Professional bettors have varying approaches to the madness when it comes to wagering on conference basketball tournaments. I ...