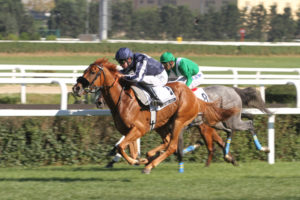 With legalized sports gambling banned in almost every state across the U.S., New Jersey’s Monmouth Racetrack made a major wager on sports betting.

Call it the Last Chance Saloon.

Introducing Dennis Drazin, who has operated the struggling venue since 2012 and always believed the Supreme Court would overturn the federal ban on sports betting. Knowing he couldn’t wait for the gambling party to start without him, Drazin went out and got some financial backers and a key renovation plan.

He set his sights on the racetrack’s depressing old sports bar.

Drazin spent $3 million on the tavern and — just like that — Monmouth had a huge head start on the competition. The bar is now waiting anxiously for the gambling bill to become the state’s newest law. Once it passes, the venue will be ready for action.
Legal update: New Jersey plans on voting on the bill as early as June 7 and the sports bar hopes to accept legal wagers on a variety of events soon after. If thing go as planned, another betting site could soon open at Monmouth.

According to The New York Times, Drazin said he didn’t really view the $3 million renovation as a gamble since he believed legalized sports betting would prevail. He’s now working on creating apps for mobile betting similar to those used by successful sites such as bet365.