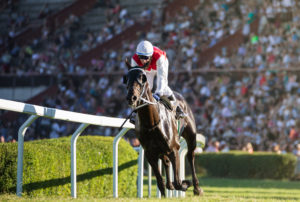 The wildly popular Cheltenham Festival is rapidly approaching on the horse racing calendar. The four days of festivities are set for March 13-16 in England’s gorgeous Cotswolds region in Gloucestershire. As always, the National Hunt jump racing activities occur at Prestbury Park Racecourse and feature about 500 of the best Irish, British and internationally trained horses in the sport.

Cheltenham remains a significant, decidedly important event on the UK racing calendar — in large part because the Grand National is the only event that doles out more prize money. And you want some excitement and color to go with your gambling? There will be plenty of nattily attired Irish punters in attendance given Saint Patrick’s Day coincides with the Tuesday-Friday event. The festival expects roughly 200,000 denizens to join the action.

The four days of racing features a roster of highly anticipated Grade I events, including the World Hurdle, Champion Hurdle, the Cheltenham Gold Cup and the Queen Mother Champion Chase. This year’s festival promises to see heavy wagers at the betting windows with bookmakers taking in millions of pounds. Other items of note: While Champion Day and the famous Cheltenham roar kick things off, Ladies Day is on Wednesday, March 14, and the highly anticipated Gold Cup Day wraps up the event on Friday March 16.

For those impressed with longevity and pedigree, Cheltenham Festival has been on the British jump racing calendar since 1860. The original event was held at Market Harborough and originally known as the Grand National Hunt Meeting. While the event has taken place at several locations over the years, including Warwick Racecourse, the festival has been held at Prestbury Park in Cheltenham since 1911.

While the festival was a three- or two-day affair for many years, the event became a four-day event starting in 2005. This means punters and fans are treated to a championship race on all four days, culminating with the Gold Cup.

NEARLY 30 RACES IN ALL

In total, there are at least six races each day — with 28 heats overall. One of the most popular is the Foxhunters’, which is regarded as one of the season’s biggest Hunter Chases. This takes place on the last day on the Gold Cup course and it’s now known by many as the amateurs’ Gold Cup.

The Cheltenham Festival is more or less exclusive to British and Irish entrants but a few international horses have been involved over the years. A handful of top French horses have competed, including two-time World Hurdle winner Baracouda.

Ruby Walsh has easily been the top jockey at Cheltenham lately given he won the most races from 2008 to 2011 and 2013 to 2017 (Barry Geraghty interrupted his streak in 2012). As far as the most successful trainers go, Gordon Elliott’s horses won six races last year while Willie Mullins had the most wins in four of the previous five years.

Cheltenham knows how to throw a party and keep people coming back. Fans and punters will find a wide range of bars, restaurants and hospitality options at the festival. The atmosphere is fantastic with plenty of live entertainment to add to the vibe.

Boxing fans are getting their wish: More and more world champions are unifying their titles against each other. Fight fans are in for a treat March ...