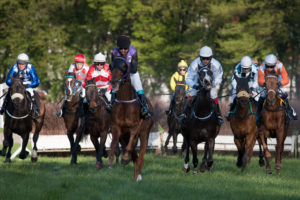 Horse racing fans and gamblers are in for a treat March 13-16 at Cheltenham Racecourse in England as the annual four-day jump racing festival will feature a total of 28 different races overall.

The Cheltenham Gold Cup is the event’s showpiece so let’s take a closer look. Post time for the Grade One, extended 3m 2f race is 3:30 pm local time on Friday, March 16 with the winner raking in about $500,000.

Last year’s winner, Sizing John, hopes to cash in and defend his Gold Cup crown. He opened at bet365 as third-favorite at 6/1 to retain the crown. Of course, don’t forget the odds can continuously change from day to day depending on the wagering action. Sizing John won the John Durkan Memorial Chase in Ireland in December with Robbie power riding the thoroughbred, but then finished a disappointing seventh in the Christmas Chase at Leopardstown shortly after.

Might Bite, a nine-year-old Scorpion gelding trained by Nicky Henderson, opened as the favorite at 3/1. He fell at the Kauto Star Novices’ Chase last year when out in front, but has gone on a five-race winning streak ever since. This includes Grade One victories at the RSA Chase and the King George VI Chase under jockey Nico de Boinville. The Gold Cup will be his most difficult test so far as it’s his first shot at it, but definitely can’t be ruled out. Might Bite enters the race with 14 lifetime jump races under his belt and has won nine of them while placing second and third once each. He last ran on Dec. 26 at Kempton Park for the King George VI Chase.

Native River of Ireland finished third in last year’s Gold Cup and is trained by Colin Tizzard. He opened as the second favorite at 11/2. The horse has steadily improved since his first Grade One win in April, 2016 at Aintree, including victories at the Welsh Grand National eight months later and the Grade 2 Denman Chase at Newbury as recently as February 10. The eight-year-old Indian River gelding ran a good race at the 2017 Gold Cup under jockey Richard Johnson, but the drying ground didn’t help him. In addition, he ran on a monthly basis up until Cheltenham so wasn’t at his freshest. Native River has competed in 20 career jump races with 10 wins, two second-place finished and five third-place.

The entire field and each horse’s opening bets365 odds for the Cheltenham Gold Cup are (odds as of late February):

By Accuscore Last week, we had the Warriors’ probability of winning an NBA title at about 33%. After thousands of game simulations, we now put ...