Champions League Betting: Which Teams will be in the Quarterfinals? 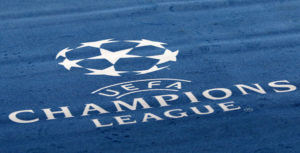 The wildly popular European Champions League will be down to the final eight teams by March 14 as the second legs of the round-of-16 end this week.

So who are the favorites to grab this year’s coveted tournament, which concludes in Kiev, Ukraine on May 26? Let’s take a look…

Bet on the Champions League at bet365

We know it won’t be Tottenham Hotspur, Porto, FC Basel or Paris Saint-Germain. They were all eliminated from action last week.

As of March 11, this leaves Manchester City and Liverpool of the English Premier League as certain quarterfinalists — along with Juventus of the Italian Serie A and Spanish giants Real Madrid. These four clubs are in.

As far as the other four candidates, it’s anybody’s guess. But it looks like reigning German Bundesliga champions Bayern Munich are a good bet following their devastating 5-0 first-leg home win over Besiktas of Turkey. They’ll need to suffer a historic meltdown not to go through to the next round, but stranger things have happened in the world of sports.

Quick look back
Man City made it to the final eight by downing Basel of Switzerland 4-0 away in their first leg and losing 2-1 at home to advance 5-2 on aggregate. Liverpool crushed Porto 5-0 in Portugal and were held to a 0-0 home draw at Anfield to go through 5-0.

PSG lost 3-1 in Spain to Real Madrid and were edged 2-1 at home to go out 5-2 on aggregate. Tottenham looked to be in great shape with a 2-2 away draw in Turin and held a 1-0 lead over Juventus at home. But they suffered a three-minute collapse and were ousted 4-3 on aggregate.

Shakhtar surprised Roma with a 2-1 home win in the first leg, but they’re 9/2 underdogs to win the second leg with Roma at 3/5. Man United was held to a 0-0 draw in Spain in their opening match and are 4/7 favorites to take the rematch with Sevilla at 11/2.

Besiktas are 7/2 to win at home with Bayern Munich favored at 4/7. As for mighty Barcelona, they managed a 1-1 draw in London against Chelsea and are favored at 2/5 in their home leg with the Blues at 15/2.

Don’t forget, the round-of-16 has to be settled this week and will be done so on the aggregate score over the two legs. If the aggregate score is level after 90 minutes in the second leg, the away-goals rule is in affect. If it’s still a draw after that, 30 minutes of extra time will be played to decide a winner. Away goals will also counted in extra time if both teams should score. If it’s still level, we’ll be treated to the dreaded penalty shootout.

Quarterfinals action
The first leg of the quarterfinals kick off April 3 and 4 with the second legs set for April 10 and 11. The draw will be held on March 16, and we can now see teams from the same country matched up against each other, such as Man City vs Man United, Liverpool vs Chelsea, Juventus vs Roma and Real Madrid vs Barcelona — if they all make it.