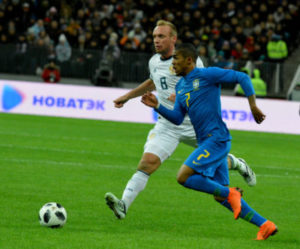 The European Champions League quarterfinals may be only half over, but it doesn’t look great for the four losers of the first leg. We find Real Madrid, Barcelona and Liverpool with three-goal leads, while Bayern Munich is up by just one (but heading home for the second leg).

Bet on football at bet365.com

Liverpool may have Manchester City’s number this year. The Reds are the only team to down the Premier League leaders in league action and lightning has now struck twice with an emphatic 3-0 win in the first leg. The goals came fast and furious at Anfield with Mohamed Salah, Alex Oxlade-Chamberlain and Sadio Mane finding the net in the 12th, 20th and 31st minutes respectively. City didn’t have an answer for the onslaught and still couldn’t muster a shot on target (despite 66 per cent ball possession).

But with Man City and Liverpool being the top two scoring teams in the Premier League this tie may be far from over. Let’s not forget Liverpool had a 4-1 lead against them in January and had to hang on for a 4-3 win. As of April 5th, bet365 listed Man City as the favorites to win their home leg at 1/2 with Liverpool 9/2 and a draw at 18/5.

Perhaps Barcelona’s 4-1 home win over Roma was as predictable as snow in winter, but they still had to come up with the goods on the pitch. The visiting Italians managed to keep Lionel Messi off the scoreboard, but must be kicking themselves over Barcelona’s first two goals. Roma basically handed the Spanish league leaders a ticket to the semifinals by scoring a pair of own goals in the 38th and 55th minutes.

The home side finally scored one of their own in the 59th minute for a 3-0 stranglehold, but Edin Dzeko found the back of the net for Roma in the 80th minute. Luis Suarez then put an exclamation point on the win with his 87th-minute score. It’s hard enough to beat Barcelona as it is, but nearly impossible when you start scoring goals for them. It doesn’t look good for the Italian side — even though they’re coming home as bet365 lists them as 7/2 underdogs with Barcelona 8/13 and a draw also at 7/2.

The home side opened the scoring in Sevilla just after the half hour mark, but allowed Bayern back in the game just five minutes later when Jesus Navas inadvertently knocked the ball into his own net. That was arguably the turning point of the night as Thiago Alcantara eventually scored the winner for a 2-1 victory in the 68th minute. Bayern deserved the win based on the overall play over 90 minutes, and the Bundesliga leaders are listed as 1/4 favorites to win their home leg with Sevilla 11/1 and a draw at 9/2. Although Bayern has just the slimmest of leads, their two away goals should be the difference if they happen to slip up at home.

What is it with Cristiano Ronaldo? This guy just gets better with age. The Portuguese star already owns numerous Champions League records and added another to the ever-growing list by scoring in his 10th straight tournament game. In fact, he scored twice in Real Madrid’s 3-0 away victory in Turin and should have notched a hat trick.

Ronaldo opened the scoring in the third minute with his fastest ever Champions League goal then doubled the lead with a stunning over-the-head bicycle kick in the 64th minute. This remarkable example of athleticism will go down in history as one of the greatest goals in Europe and even Juventus fans gave him a well-earned standing ovation. Juventus shot themselves in the foot and scuppered any chance of a comeback when Paulo Dybala was sent off with a red card two minutes after Ronaldo’s masterpiece. The inevitable then happened six minutes later when Marcelo Vieira put the icing on the cake. Real Madrid returns home and are 4/7 to win the second leg with Juventus 9/2 and a draw 31/10.

Note: The odds were correct at the time of publishing.