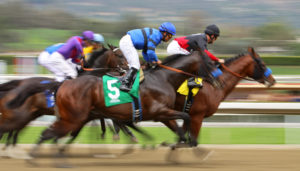 The Run for the Roses is expected to attract approximately $200 million in wagers Saturday, May 5 when the 144th edition of the Kentucky Derby takes place at Churchill Downs.

Bet on the Kentucky Derby at bet365.com

There are plenty of betting choices available, including the traditional win-place-show, exacta and trifecta options as well as dozens of others such as head-to-head matchups, the margin of victory, the winning time etc. The world’s most famous horse race will feature a field of up to 20 horses consisting of three-year-old geldings, fillies and colts.

Kentucky Derby odds on the 20 horses and four standbys from US Racing as of April 22:

Let’s take a quick look at the six favorites:

Justify 4/1
Is the early buzz justified? This chestnut’s unbeaten so far but is perhaps lacking in experience as an unraced juvenile. Justify debuted in February and has won three straight races including the Santa Anita Derby. He’s trained by legend Bob Baffert, who is currently in a second-place tie for the most Kentucky Derby victories at four.

Bolt D’Oro 13/2
This popular juvenile colt didn’t win either of his two starts in 2018, but managed to gain a victory via disqualification at the San Felipe Stakes. He also came in second at the Santa Anita Derby against some elite rivals. Those races could prove to be invaluable stepping stones for the Kentucky Derby though.

Mendelssohn 13/2
Mendelssohn may be better known to some as the half brother of Beholder, but he’s also a star in his own right. Mendelssohn cleaned up at the dirt track U.A.E. Derby, won by over 18 lengths, and set a new track record in a seemingly effortless run. No European-trained horse has ever won the Kentucky Derby, but this Irish-trained colt is hoping to snap the jinx under trainer Aidan O’Brien.

Good Magic 15/2
Finished a disappointing third at the Fountain of Youth Stakes, but then bounced back with a win at the Blue Grass Stakes. If he can replicate last year’s winning performance at the Breeder’ Cup Juvenile then Good Magic will be a force to reckon with on Derby Day.

Audible 8/1
Bred in New York, but definitely found a new home in South Florida this winter by winning the Holy Bull Stakes by 5 ½-lengths at Gulfstream Park. He then won the Florida Derby by three lengths with BRIS Speed ratings of 105 and 107 respectively. Audible’s turn of foot may be a huge advantage during the last half-mile on May 5 at Churchill Downs.

Magnum Moon 8/1
This fine colt debuted in January and has racked up four straight wins since then, including a decisive decision in the Arkansas Derby. The Todd Pletcher-trained horse has looked good at all venues so far and will be ridden by Luis Saez, who’s currently having a career year by dominating the jockey standings at Gulfstream Park.